What the Bartender Is Drinking

I love the flavour of American Whiskey, and make a lot of cocktails with American Whiskey as a base; never mind my own recipes history has already given us greats such as the Old Fashioned, the Whiskey Sour, the Manhattan and the Boulevardier. 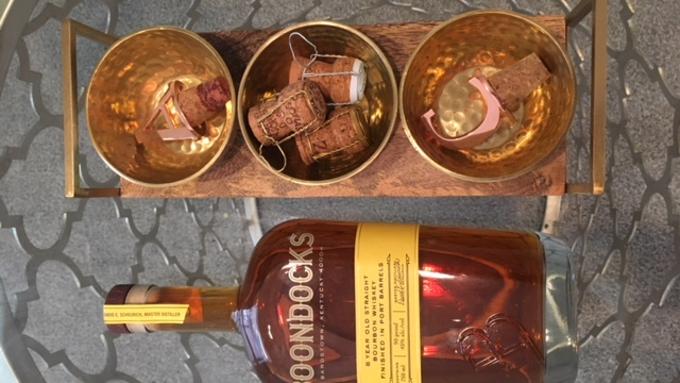 So when I noticed this bottle in my local liquor store it was no surprise that it happened to 'fall' into my basket, the American Whiskey taste that I love with the added potential provided by it spending time in casks previously used in the production of Port.

Boondocks Bourbon hails from Bardstown, Kentucky, a traditional hot-bed for high quality whiskey making; and whilst Kentucky is the spiritual home (pardon the pun) of Bourbon there is no legal requirement that it must be made in this state, in fact it can legally be made anywhere in the US.

Boondocks is the brain-child of Dave Scheurich, formerly of Woodford Reserve fame (and winner of the Whiskey Advocate Lifetime Achievement Award winner - so basically he knows his stuff!).  Dave takes his 8 year old straight bourbon ('Straight' is an American Whiskey legal term that denotes that the whiskey has been aged for a minimum of 2 years) and having crafted a fine whiskey in it's own right he then finishes it by letting it mellow a while in ex-port barrels.  Clearly Dave is in no rush, perhaps that's why he chose the name Boondocks, as they say "things are not slow, but we leave enough time for things to be done right".

Flavour - Vanilla follows through onto the palate from the first use oak cask (but then I love vanilla!) but there is also plenty of other interesting notes such as nutmeg and gingerbread.

Conclusion - At $42.99 / £32.50 This might not be the cheapest bottle you ever buy for your bar, but it's by no means expensive in terms of others spirits on the market.  Personally, I'm glad it fell into my shopping basket and I'd be quite happy to purchase another bottle when this one is finished, which might actually be sooner rather than later!

Andy Recommends - Make a Manhattan and serve it on the rocks